In the northern parts of Sweden a number of large birds can be found. Some on lakes, some in the woods and some in tree tops at wintertime. Some eat fish, some plants and some meat. At the same time, take the opportunity to experience the arctic atmosphere these birds live in. In summertime we go by car and walk for birdwatching, in wintertime we go by cross country skis or snowmobile.

We will also make an atmospheric camp fire, grill some sausages and have something to drink. Sausages and drinks is only 50

Below you find pictures and information about the arctic birds you have the chance to see.

The birdwatching takes place in January, February, March, July, August and in December 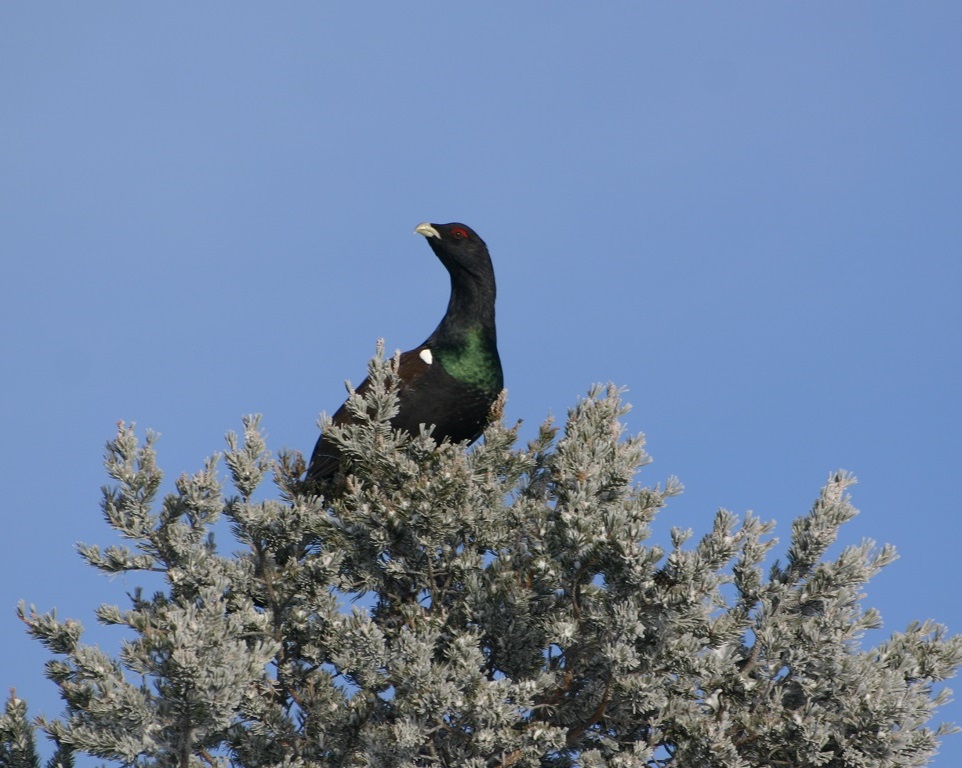 The capercallie (Tetrao urogallus) is the largest wild game bird in Sweden. It is found in open older coniferous forest, preferably in forests over 70 years old. The food consists of various plant parts, such as buds, dilute leaves, grains, seeds and berries, but it also eats insects, larvae and worms, especially the young are fed with insects. During the winter, pine bars are the main food.

In March and April the males are gathered early in a morning play, dance and fight. A very spectacular and sometimes violent event.

The length can be over 90 cm from the pencils to the beak and in rare cases the weight up to 7 kg. Usually it weighs considerably less, 3.5-4.7 kg, which is about twice as much as an average hen. The chicken is separated from other chicken birds by the rust-brown color of the breast and tail.

This bird is usually quiet, except for the spring game before breeding. During the game, 3 different sounds are heard: Snapping, gobbling, and finally the whistles. Of these sounds, the gobble is heard best, in calm weather it can be heard at a distance of up to 150 meters. It can also cut beak, usually this sound is emitted when it becomes irritated or disturbed. 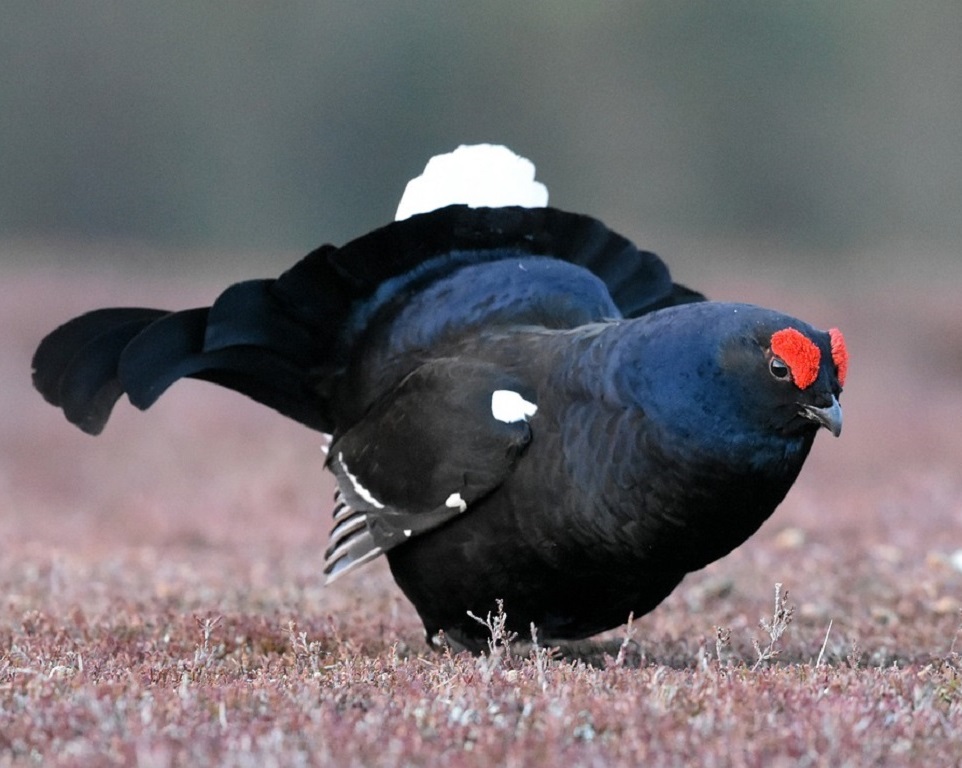 Black grouse (Lyrurus tetrix) thrives best in areas where birch and coniferous forests alternate with meadows, mosses and mountainous soils. It is also available in single bush and heather. In winter, the black grouse sometimes dig down in the snow to protect itself from strong cold and hard winds.

The food consists of buds, thin leaves, grain, seeds and berries. Blueberry shoots are an important part of the diet in the spring. It also eats insects, larvae and worms, especially the new hatched get insects to eat. In winter, birch bud is the main food.

During early spring mornings before the sunrise, they pride themselves on the playground (for example, on mosses, frozen marshes or lakes) to show off and deliver their special mating lanes. In the sunrise, the roosters sit down in the trees and continue to play. Violent battles are often fought between the roosters during the game. Even the hens are found on the playground, but they stay in the shadows and are approached by the victorious roosters. 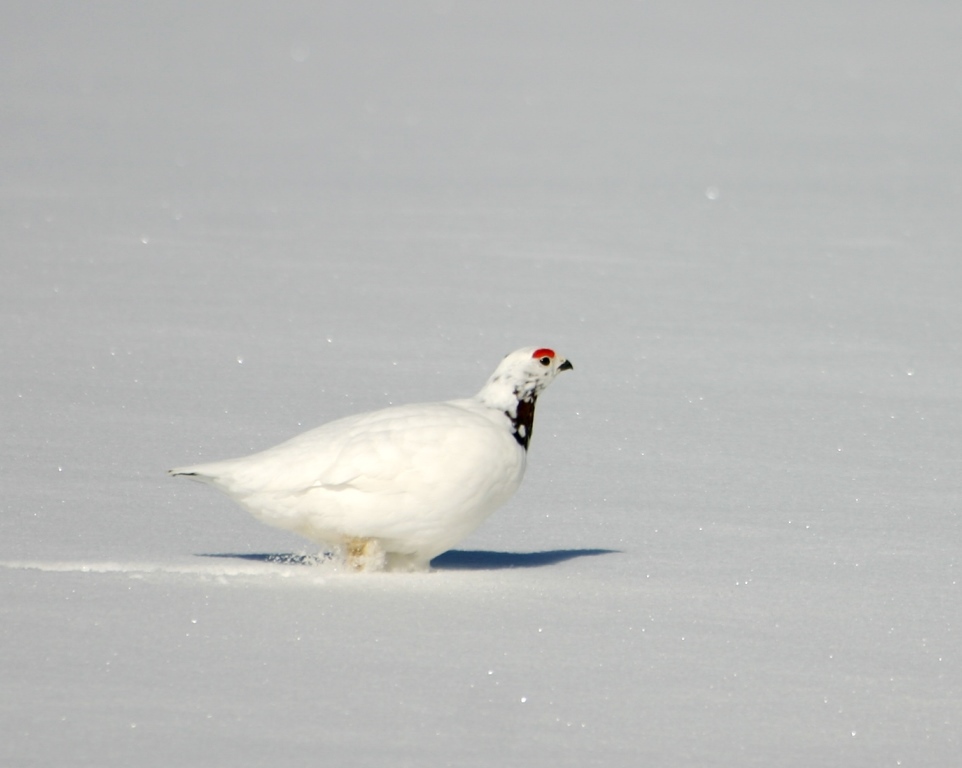 The grouse (Lagopus) are specialized in living in cold climates and staying in open biotopes, such as heaths and woodless mountains, but retire in winter to bush and forest areas. The grouse live in pairs and stay mostly on the ground, where they seek their food consisting of berries, buds, thin leaves and seeds. In winter, birch bud is the main food. The new hatched’s food mostly consists of insects. The ptarmigan females only takes care of the kids, which is most common with chickens, while the willow share the task. Both species lay their nest directly on the ground. 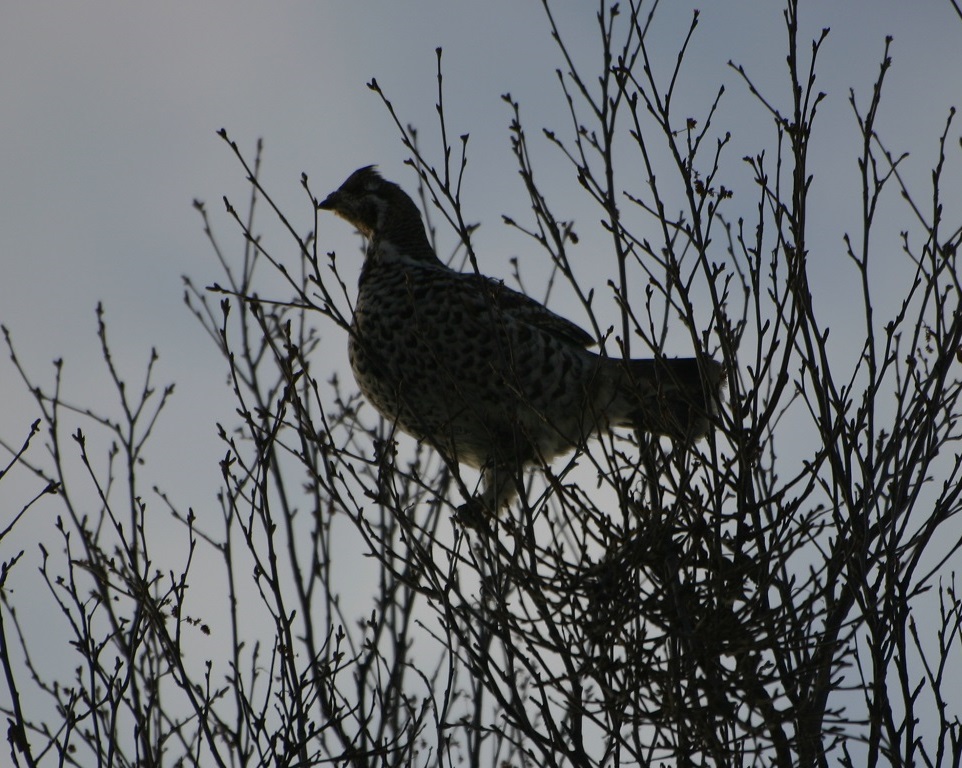 Hazelhen (Tetrastes bonasia) is 34-39 cm long and has a wingspan of 48-54 cm. Hazelhen is most numerous in Norrland's forest areas. It is stationary and does not merge into larger flocks during the winter, like many other birds within the same species.  Hazelhen lives mainly in spruce forests with birch and alder involved, quite often on the ground in a zone where moorland turns into wetter and scrubbier soils.
Hazelhen is monogamous. The mating season begins in April and they make their nest on the ground. The food is mainly made up of vegetables, such as seeds, berries, buds and dilapidated leaves, but it also consumes insects, insect larvae, pupae and worms, in particular, the infants are fed with insects; In the winter, birch buds form the most important food. 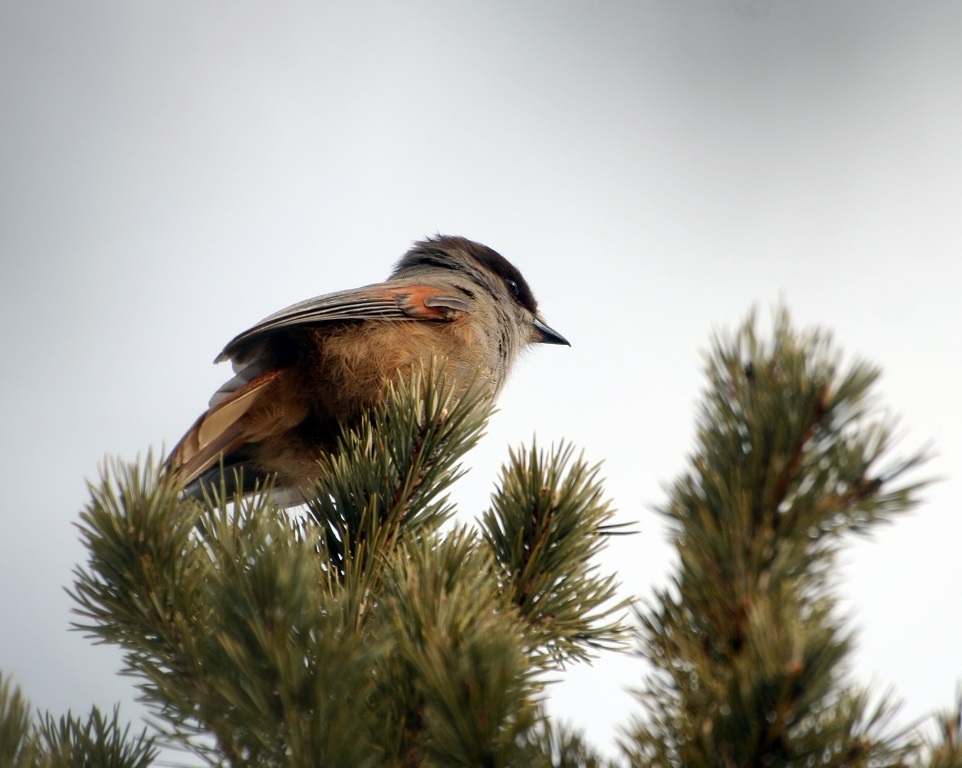 Siberian Jay (Perisoreus infaustus) is a crow-bird that occurs in lichen-dressed coniferous forest from Norway to eastern Siberia, and is not moving south during winter.

This bird is known to be very fearless, and often searches for people in the forest for food. It has an average length of 26-29 cm, a wingspan of 40-46 cm. The Sibiran jay thrives in old spruce forest rich in tree larvae, although the species can be seen in other types of coniferous forest. Old, closed forests, usually older than 60 years, are usually preferred, as the dense forest provides good protection against predators.

As of July, until the first snow falls, this bird hoards food that it places in many different places before the winter. One bird can keep track of about 5,000 different stores. About 90% of all food pieces that have been collected by one bird are eaten, which requires an incredible memory capacity.

During the high winter this bird lowers its body temperature to save energy, and is very inactive. 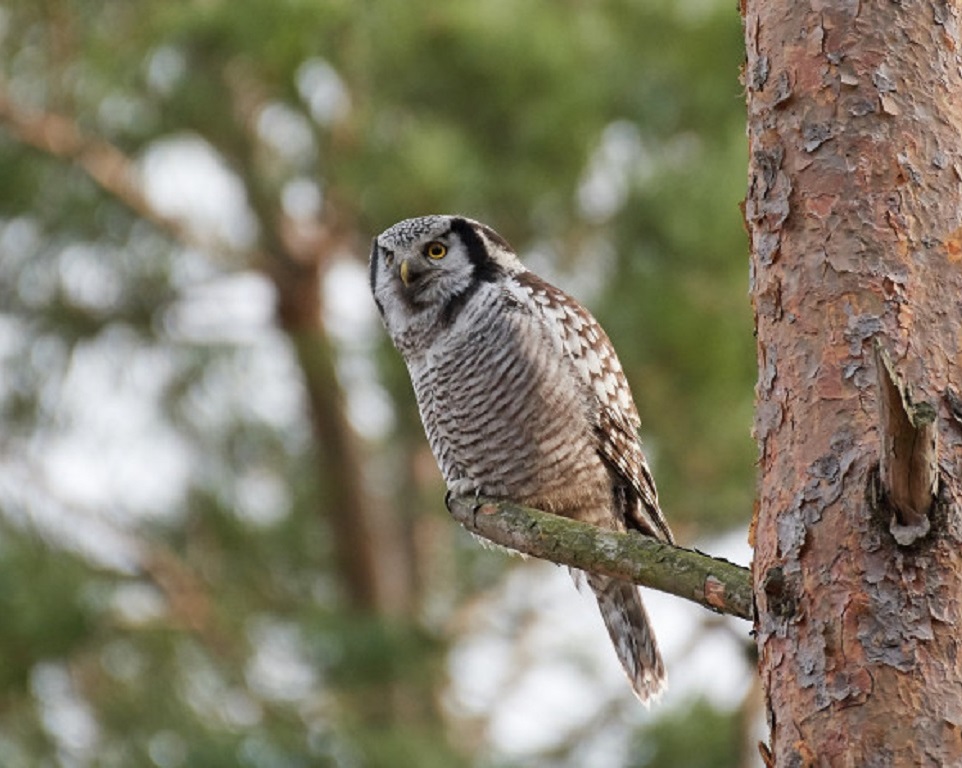 Northern hawk-owl (Surnia ulula) is 35–43 cm long and has a wingspan of 69–82 centimeters. Males weigh on average about 270 grams and females 320 grams. In flight, with its long tail and wing shape, it has a hawk silhouette which gives it its name. The hawk owl normally appears in coniferous forests and preferably at the edge towards more open vegetation. It is partially day active and places its nest in hollow trees or uses nests that other birds have abandoned. The main food consists of small rodents and smaller birds. It sits and scouts for prey. When it detects something, it flies very fast and catches it. The hawk owl has good hearing and it happens that it catches rodents moving in the snow. 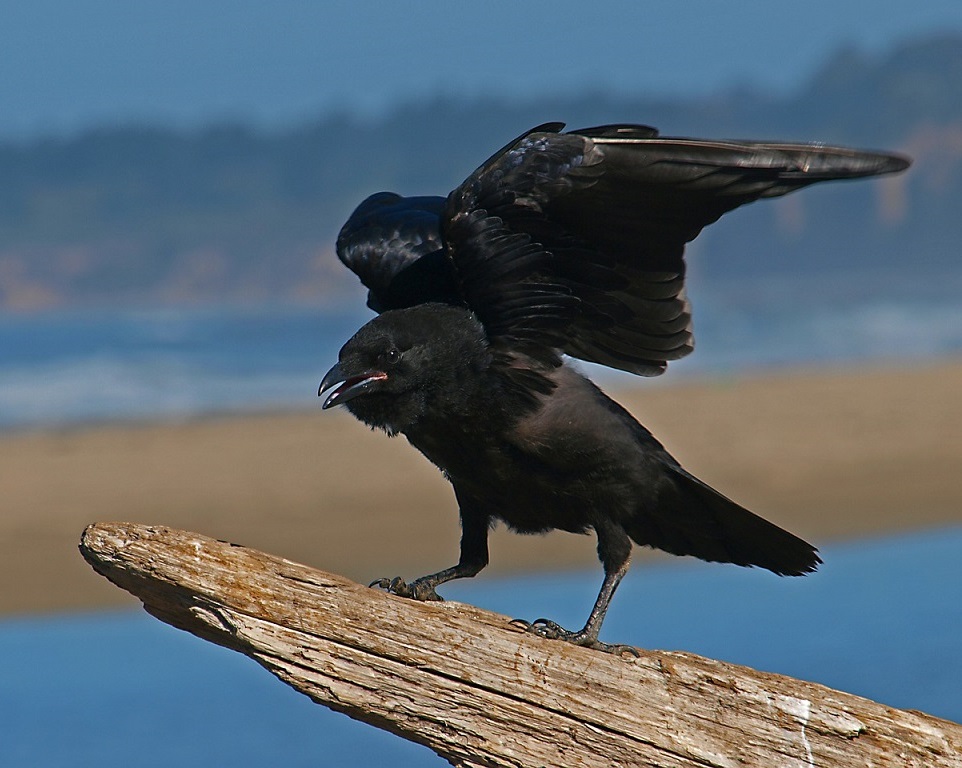 Raven (Corvus corax), an adult raven is 54–67 cm and has a wing span of 115–130 cm. Raven in nature is about 10 to 15 years, but lifetimes of up to 40 years have been noted. Young birds often live in smaller flocks, but later in life they form lifelong couples. Each couple defends a territory.

Raven is extremely versatile and opportunistic when it comes to finding food sources. They feed on dead animal left overs, insects and food waste, but also cereals, berries, fruits and small animals.

There are observations of remarkable problem solving in this species, which has led to the perception that it is very intelligent. For a long time, it has been mentioned in religion / mythology, art and literature. 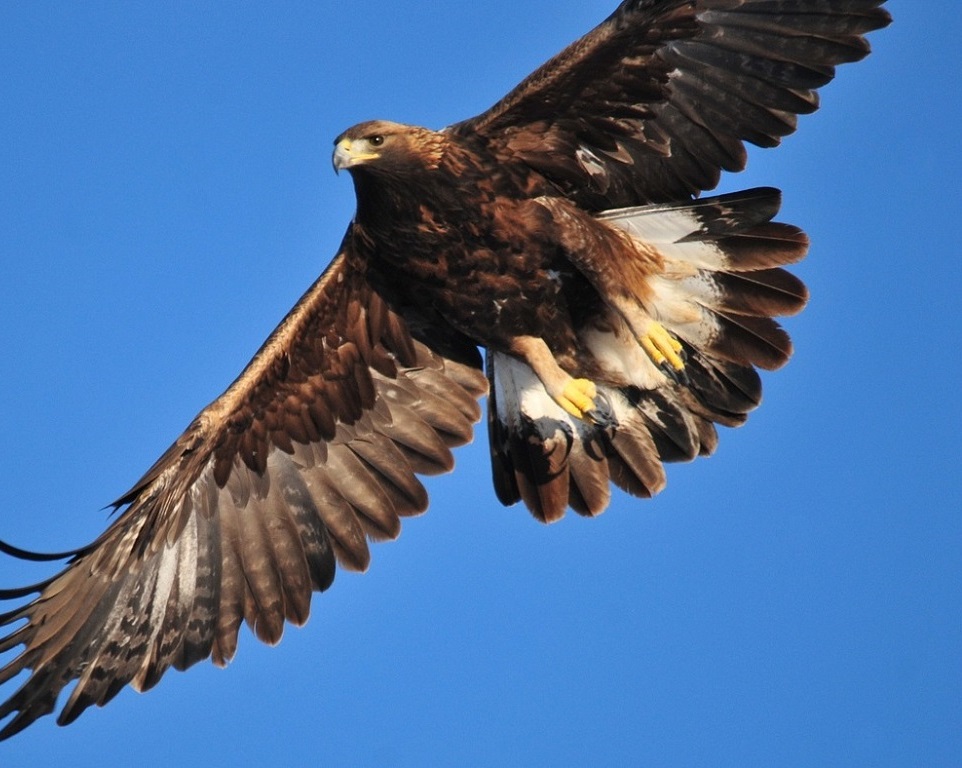 Golden Eagle (Aquila chrysaetos), this eagle has a wing width of about 2 meters and weighs up to 7 kg. As with many birds of prey, females are larger than males.

The golden eagles use their speed, mobility and very powerful claws to capture different kinds of prey, mainly medium-sized mammals and birds, but also to a lesser extent snakes and lizards.

The golden eagles are monogamous and couples hold together for several years, or even their lives. The couple keep areas that can be very large, and within the area often several nests are built which they alternate between during different years. The nests are placed in raised places such as rocks, trees or man-made constructions. 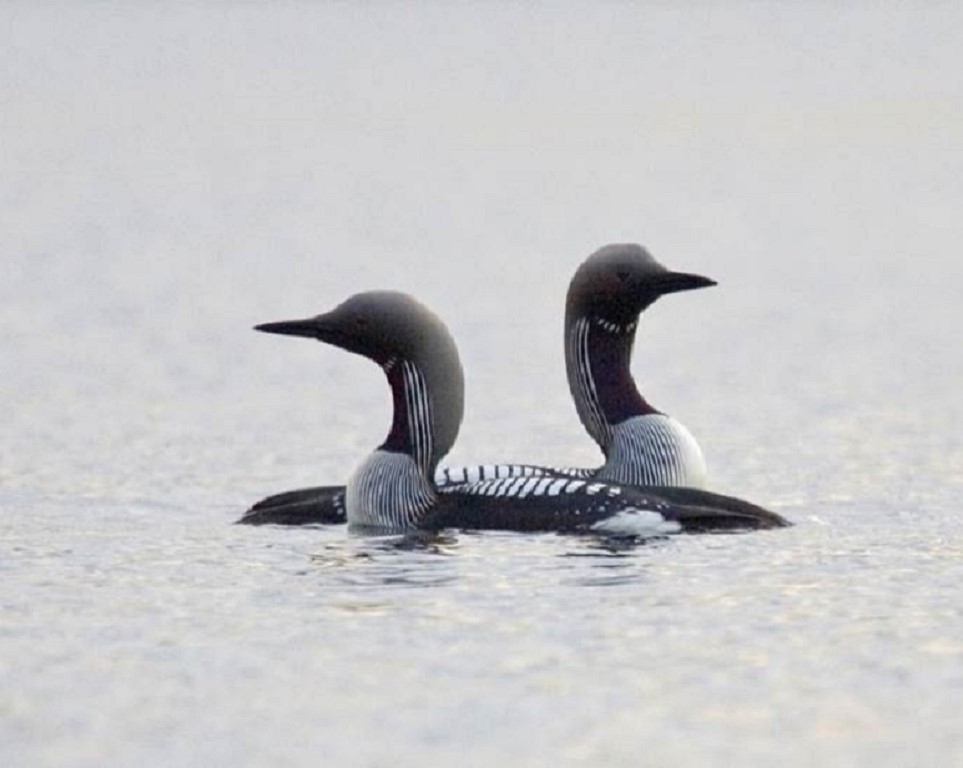 The Loon (Gaviidae) body length is 65–74 cm, the wing span 105–125 cm and the weight 1.3–3.4 kg, and is the same for both sexes. The loon is a migratory bird that nestles in clear fish-rich lakes inland or in sea bays and moves in winter to marine areas.

It dives to find food and goes as deep as 5 meters. The loon is pair-forming, usually for life. The territory around the nest is large and is defended intensively against other loons. The couple take care of the kids who are ready to fly after 60-65 days, the kids then follow the parents on the move. The youngsters are good swimmers immediately after hatching and dive unhindered. 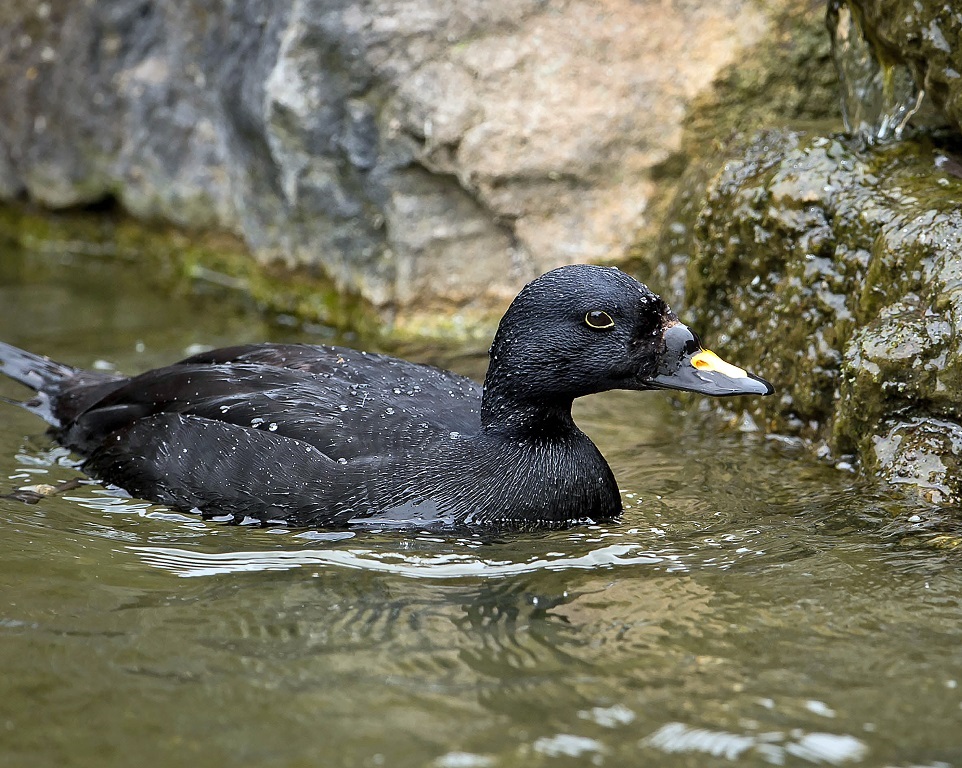 The common scoter (Melanitta nigra) is a medium-sized (44-54 cm) and compact duck bird with wingspan of 70-80 cm. These birds winter at sea in the North Sea and the Baltic Sea. It arrives at the breeding grounds in April-May and leaves in July-October. In northern Sweden's mountain lakes, it is very common and during the migration period it is not rare in central and southern Sweden's lakes. 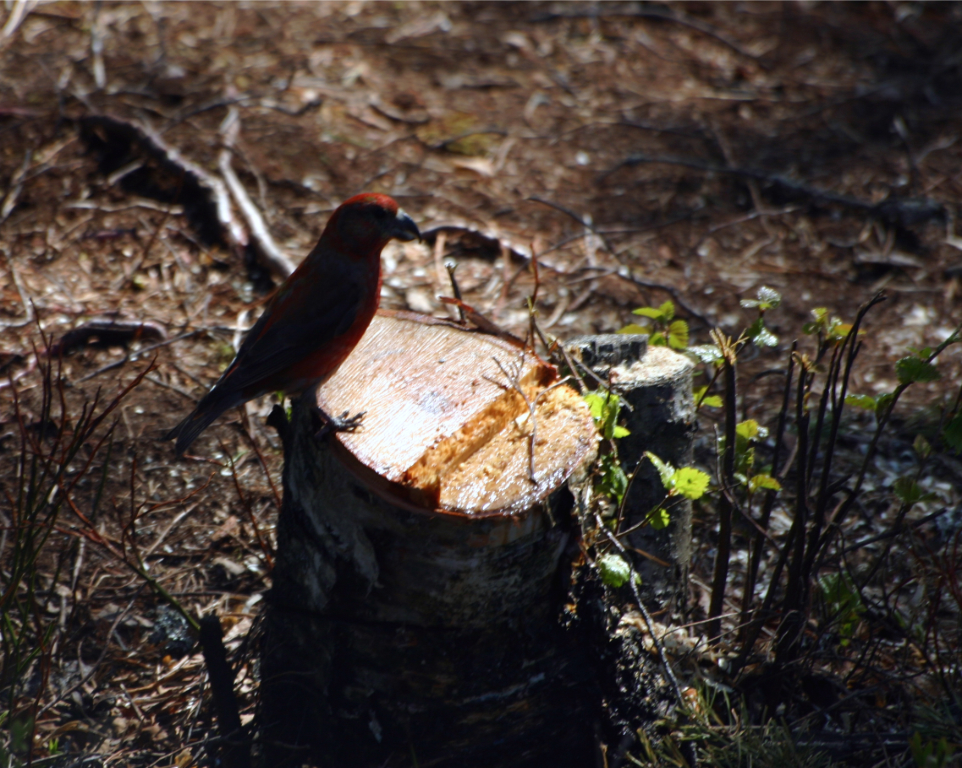 The parrot crossbill (Loxia pytyopsittacus) sexes look very different and the kids are differently drawn than the adult birds. The males undergo drastic color changes, mainly from yellow to red.

Crossbills occur mainly in the northern hemisphere in Europe, Asia and North America. The crossbills mostly live in coniferous forests. With their strong beak, they skillfully remove seeds from cones. They are skilled tree climbers and use their beak to help them cling.

They usually lay eggs in late February or early March. Nests, which is already built during the winter, is large and well-built of spruce sticks and is heat-insulated with lichens, such as beard lichen, and is often built in coniferous crowns.

This is real wildlife with no fences and cages. So please understand that we cannot give a guarantee on seeing these wild animals. But with our local nature knowledge and wildlife experiences, the chances on finding them are very high.